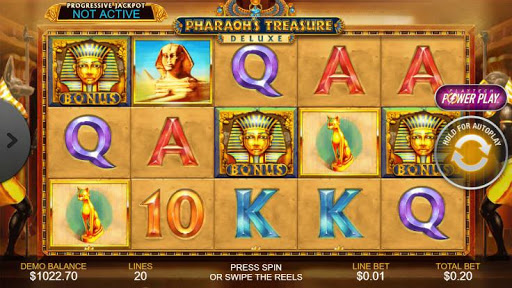 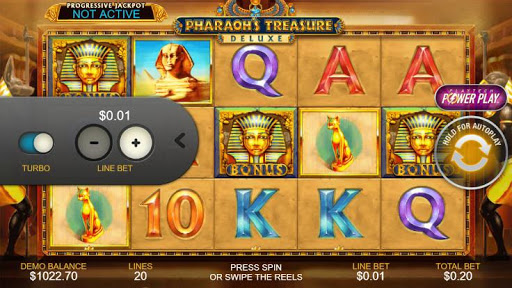 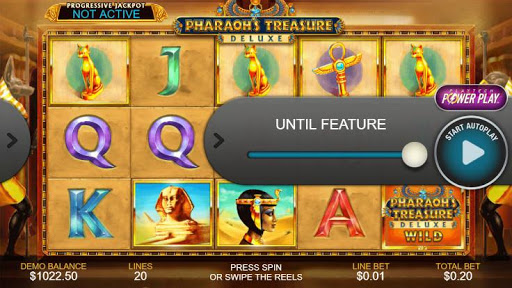 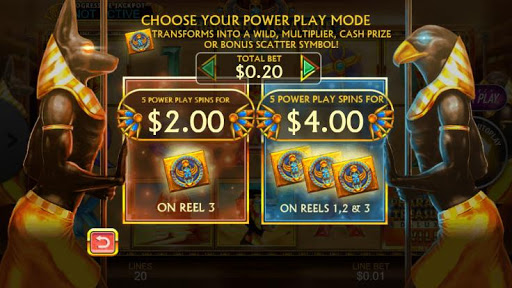 How to play Pharaoh’s Treasure Deluxe
While playing Pharaoh’s Treasure Deluxe, you can adjust the total bet by using the Total Bet menu. The value of this parameter can be from 0.20 to 500 credits. Also, the game has an additional ‘Highroller Bet’ function. By activating it, you will add a special symbol on the playing field, which can turn into a wild, scatter or icon that launches the bonus round. The total bet multiplied by 10 will add one such symbol on the reels, and if it is multiplied by 20 then 3 such icons will be placed onto the reels.

The control interface of Pharaoh’s Treasure Deluxe also has the following buttons:

info — opens the pay table
auto play — activates an automatic mode for the rotations
turbo mode — accelerates the animation of the spins
spin — starts a single round in a manual mode
To win, you need to collect from 3 to 5 identical symbols on a payline. In the lower left part of the interface, your game balance is displayed.

Symbols and winnings
The logo of the game is used as a wild symbol Pharaoh’s Treasure Deluxe video slot. It replaces any missing icons in winning combinations that do not have special functions. The wild symbol has multipliers of 50, 200, and 500. Similarly, a portrait of an Egyptian queen increases the linear bet. A pharaoh`s statue has multipliers of 30, 100, and 400. An amulet with a blue stone multiplies the linear bet by 20, 60, and 300, and a cat`s statue multiplies the linear bet by 20, 50, and 200. Also, 5 symbols represented by cards are used in the game. They have the following multipliers:

A, K — 10, 40, 150
Q, J, 10 — 10, 20, 100
The bonuses of Pharaoh’s Treasure Deluxe
The bonuses of Pharaoh’s Treasure Deluxe video slot are one of the main advantages of the game. As soon as a picture with the ‘Bonus’ inscription simultaneously appears on the 1st, 3rd, and 5th reel, you will have an opportunity to choose one of two prize functions:

Tomb of Tutankhamun
Curse of the Ancients
The Tomb of Tutankhamun round takes you to an ancient tomb. There you will have to choose items and receive instant payments for this. The Curse of the Ancients includes free spins of the reels. During the spins, special disappearing symbols are used on the playing field, due to the presence of which your chances of winning significantly increase.