The Jungle Giants video slot is a five-reel machine with 50 paylines, in which players can only score wins by making matches from left to right across the reels. For all icons in this game, you’ll need to hit at least three consecutive symbols in order to score a prize, with longer combinations providing bigger payouts. Smaller wins come from a popular source: the same card game ranks (tens through aces) that you’ll see in so many other classic slots as well.

For larger wins, you’ll want to connect with some of the titans of the animal kingdom, such as elephants, rhinos, gorillas, hippos and oxen. While this is a relatively low volatility machine without any huge payouts, the elephants are still the icons you want to see, with payouts of 150 if you can manage to hit five in a row.

The key aspect to this game is the fact that these symbols can appear in a giant, 3×3 form that has the potential to cover the three central reels. These count for all of the positions they cover, which can really help with making many long win lines on the same spin.

Like most online slots, this machine also has a wild symbol that can substitute for any of the normal prize winning icons. These also come in that 3×3 style, where they are particularly valuable. In addition, the wild symbols can form their own winning lines: hit five in a row, and you’ll earn 1,000, the largest single line payout in the game.

There’s also a free games feature that can be triggered if you cover the central three reels with a Jungle Giants logo. When this occurs, you’ll be treated to eight free spins, during which you’ll enjoy some truly massive advantages. All of the card rank icons will be removed from the reels, and all icons on the central reels will be of the 3×3 variety. In addition, all symbols will come in stacks on the first and final reels. This definitely increases your odds of getting five of a kind wins, and it’s even very possible to cover the entire screen with the same character, which is guaranteed to result in a major prize. 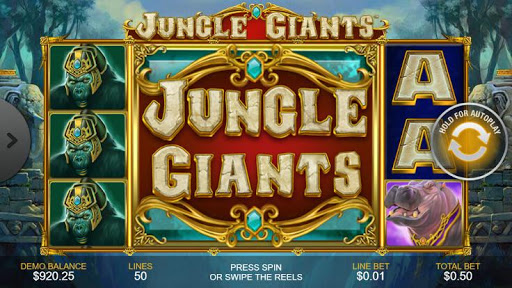 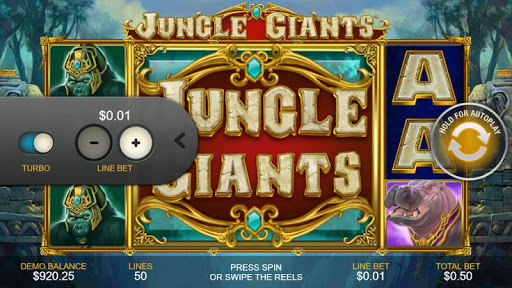 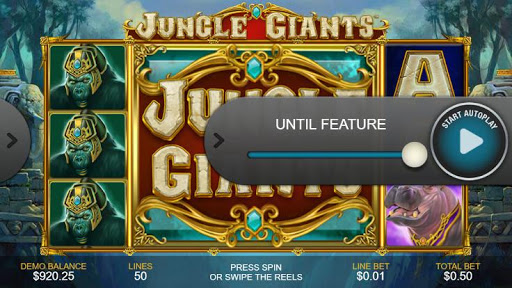 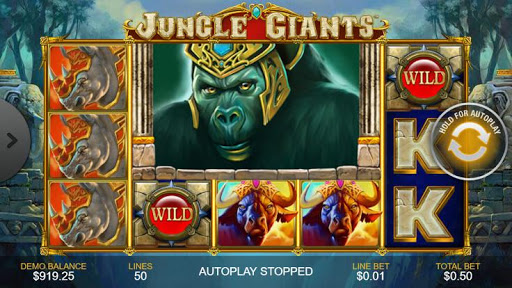