Description of 29 Card Game by NeuralPlay

Just learning Twenty-Nine (29)? The NeuralPlay AI will show you suggested bids and moves. Play along and learn!

Play with the Twenty-Nine rules you like! NeuralPlay’s Twenty-Nine offers many rule options for you to customize the game to your liking. A basic beginner version and a more advanced version are preset.

• Notrump. Allow no trump suit to be chosen by declarer. There will be no trump suit during play.
• 7th card. Make the 7th card dealt to the declarer determine the trump suit. This card is visible to the declarer when dealt, but will not be revealed to other players until the trump suit is revealed during play.
• Double. After the trump suit choice but before the second deal, the defenders will be given the option to double the bid.
• Redouble. After a double, the declaring team will be given the option to redouble the double.
• Single hand. After the second deal, players will be given the option to play a single hand. A single hand is played with notrump and without a partner against both opponents. The declarer of the single hand must capture all 8 tricks.
• Marriage (pair) bonus. When a player has both the king and queen of trump in hand at the time trump is revealed, a bonus of 4 points is received.
• Cancel invalid deals. Some hands are invalid, when this occurs the hand will be redealt.
• Reveal trump. Choose to reveal trump either automatically before the first discard or ask before discarding.
• Point for last trick. Award 1 point for capturing the last trick, making the maximum possible score 29 points instead of 28 points.
• Play direction. Choose the play direction to be either clockwise or counterclockwise.
• Bidder trump lead. Choose to allow bidder to lead trump before it has been revealed.
• Bidding style. Choose to allow bidding only the minimum legal bid or any bid between the minimum and maximum legal bids.
• Leading. Choose either the dealer or the player after the dealer to be the initial leader.
• Minimum bid. Set the minimum bid from 14 to 17 points.
• Half bid penalty. Capturing less than half of one’s bid is a double point penalty.
• 21 or more bonus. Bids of 21 or more points are worth double points.
• Undertrump. Allow the discard of a trump card of rank lower than a higher ranking trump card already on the trick.
• Game over. Choose whether the game ends at a predetermined number of points or after a certain number of hands.

Features include:
• Bid and play hints. Uncertain of what to bid or play? See what the computer would do!
• Bid and play checker. Let the computer check your bid and play throughout the game and point out differences. Great for learning!
• Undo.
• Review the play of the hand trick by trick at the end of the hand.
• Six levels of computer AI to provide challenges for beginning to advanced players.
• Unique thinking AI to provide a strong AI opponent for different rule variations.
• Claim the remaining tricks when your hand is high. Optionally, the computer will offer to claim the remaining tricks when its hand is high.
• Achievements. Challenge yourself to accomplish them all.
• Leaderboards. Climb to the top of the leaderboards as you win.
• Replay hand.
• Skip hand.
• Detailed statistics.
• Offline play.

Twenty-Nine (29) is also known as Twenty-Eight (28). With NeuralPlay Twenty-Nine, you can play to a score of either 29 or 28 by choosing to award a point for the last trick or not.

We are continuing to develop and improve NeuralPlay Twenty-Nine (29). We welcome all your feedback. Please contact us at support@neuralplay.com.
• UI improvements.

Thank you for your suggestions and feedback! 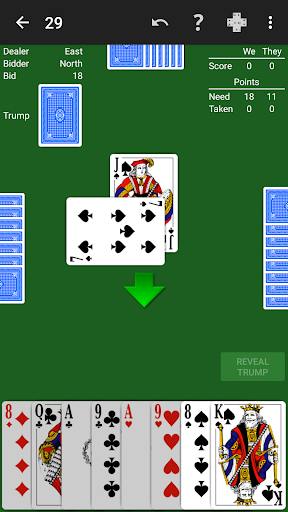 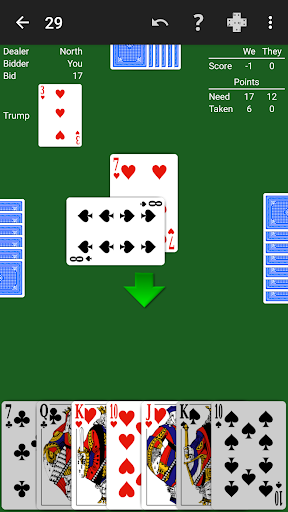 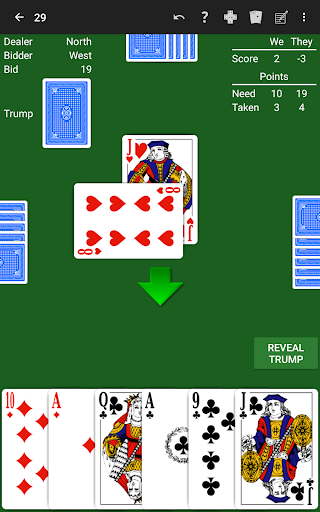 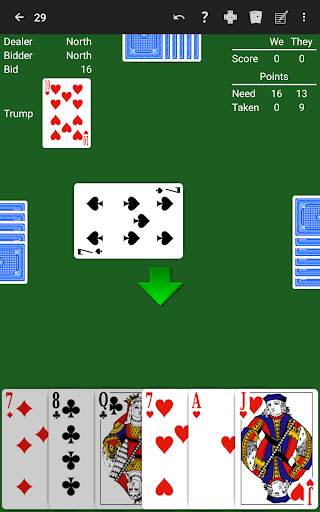 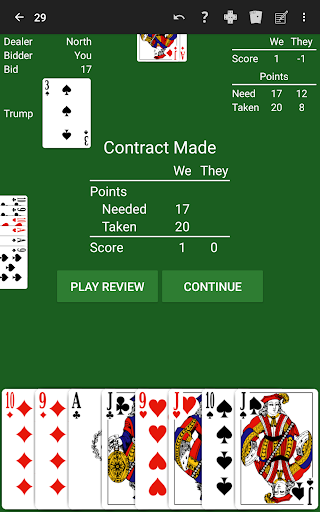 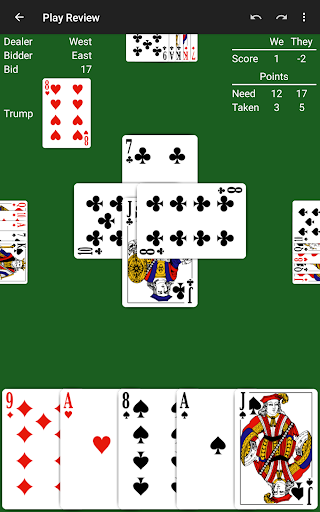 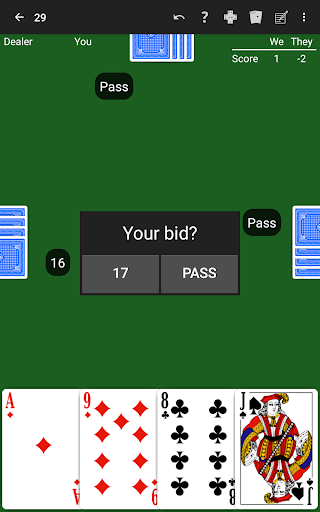 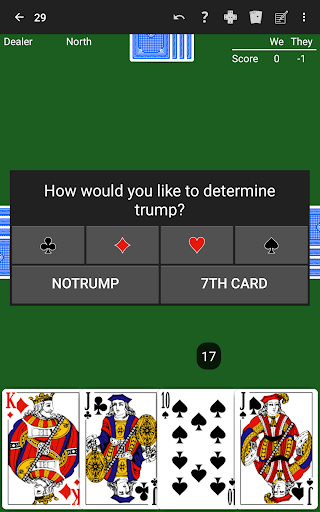 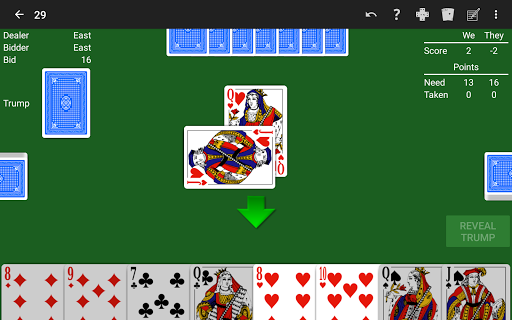 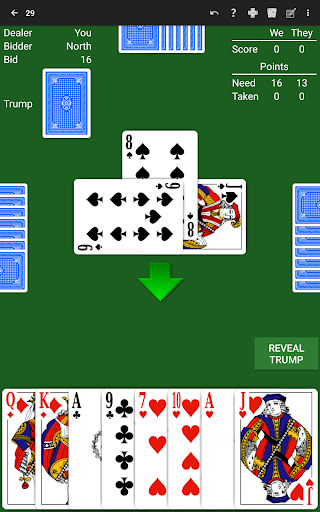 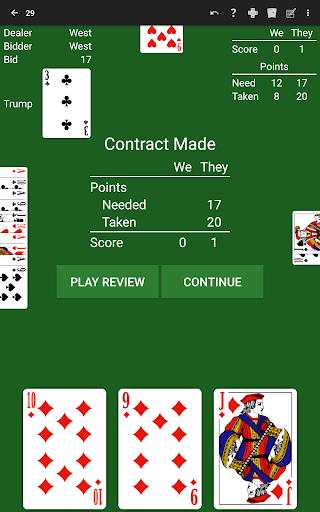 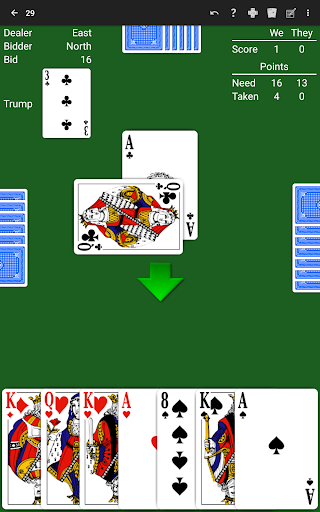 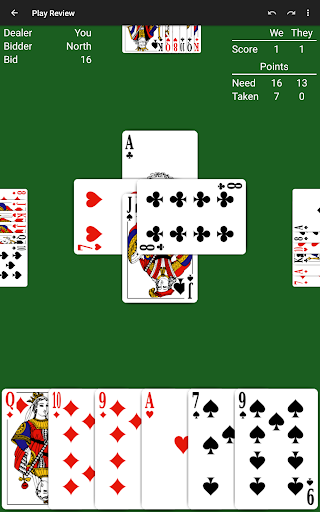 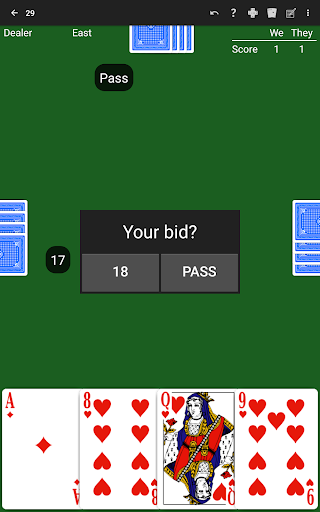 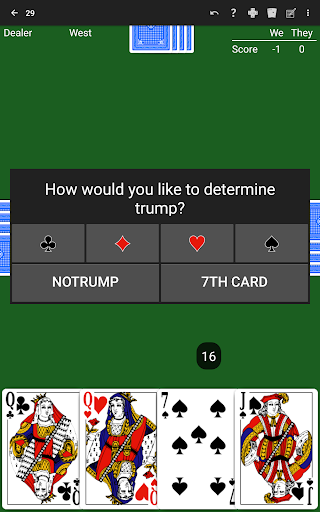 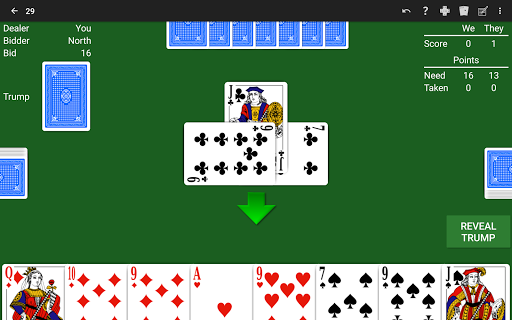